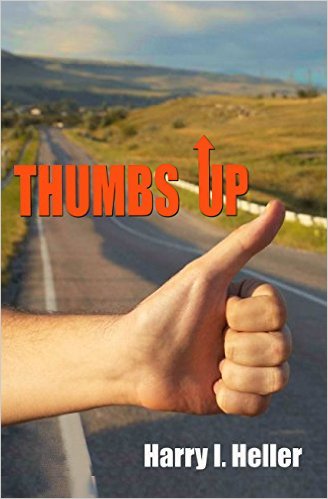 This book, written by my father, is dear to my heart. It’s a tribute to his courage and spirit of adventure.

After taking his exams for the New Jersey Bar, twenty-four year old Harry I. Heller set off on a hitchhiking cross-country adventure. Relying upon his wits and not his wallet, he traveled across the United States without paying a dime for transportation. In the days when a job paid one dollar and seventy five cents per day and seeing a movie cost ten cents, he hitchhiked his way from New Jersey to California. Among his many escapades, he got lost in the Yosemite Mountains, raced downhill in a moving van with burnt-out brakes, jumped on a speeding train, and climbed Pike’s Peak on foot.

This true coming-of-age tale shows the courage, fortitude, and determination of a young man following his dream and learning to rely solely on himself. Along the way, he offers a glimpse into our nation’s past that will make readers nostalgic for this era and more appreciative of family, friends and home.

About the Author
Harry I. Heller graduated from Rutgers University and passed the New Jersey Bar exam in 1929. To celebrate, he hitchhiked cross-county, covering 12,000 miles without paying a cent for transportation. Thumbs Up is his account of this amazing journey. This book was edited by his daughter, multi-published author Nancy J. Cohen.

“Having hiked many a mountain in & around the Adirondacks, I enjoyed this book immensely! I cringed when he or his friend had bad blisters & no moleskin, felt badly for him when he was extremely hungry & had no power bars, & empathized with him when his canvas items were so heavy or ripped. What impressed me most in the entire book is that he didn’t hesitate to describe his real, human emotions. I very highly recommend this book, it was such a fantastic read that I’ll not long forget!” Sharon, a Librarian

“What a treat! This is a real-life slice of American life that is difficult to comprehend these days. If I were teaching US history I’d have this on the reading list for that time period on the very brink of the Depression. This was still a time when people wrote correct English, and dressed nicely even to hitch a ride. Heller describes the wide variety of drivers who kindly picked them up, from salesmen looking for company, to farmers, to alarming if friendly drunks (who did the driving), to young college men–and women–like himself, touring around in a great variety of vehicles, telling their own tall tales. Harry’s description of the far west–all new to him–are vivid. Highly recommended for anyone interested in early 20th century US history.” Joan Mickelson, Ph.D., 20th Century Historian and Author of “Joseph W. Young, Jr. and the City Beautiful”

“What I find really interesting is America in 1929 and what an innocent and trusting time it was then as compared to now. I love reading about that time period and Harry’s very descriptive narration brings you right there along with him.” Janice S.

“This is a tale of wit and candor and a glance back to a different, much-more-innocent America! A time capsule memoir for those who dream of hitting the open road, or the arm-chair adventurer looking for a transportive good read.”  Sherry S.

“If you are the type that likes to see the country and are willing to walk & hitch rides, you should enjoy this… only this true story takes place back in 1929 when it was possibly safer to be out there than it is today!” Desper

“Thumbs Up is a picturesque description of a remarkable journey in a time when hitchhiking was a reasonable way to get around. Whether you are a history buff looking for a glimpse into days gone by or simply a fellow traveler, this book is sure to feed your senses.” Mac C.

When I stood between the rails upon which the caboose rested so as to get a better look through its open rear door, it was without realizing the roadbed was a hazardous place on which to stand.

The car contained a young man who, judging from his attire, was a member of the crew who occupied the home on wheels during its travels. He obligingly answered my questions pertaining to his business. Then an unknown duty summoned him to the front, and he disappeared from view behind a partition. Thinking his absence would be temporary, I waited for his return. However, he had forgotten all about me.

As I stood there, no ringing bell or whistle warned me of impending danger. One moment all was quiet and peaceful. The next moment, I was face-to-face with death.

A terrific crash shattered the silence. Simultaneously, the caboose seemed to leap toward me.

Being a few feet away from the end of the car at the time it had started to move, I instinctively raised my hands as if to thrust it back. Extending outward from the end of this caboose was a short, thick iron bar that resembled a battering ram. As this met my hands, the same thing happened to me that might occur to a person shoved backwards by a playful friend. I staggered, tried unsuccessfully to recover my balance, and then fell heavily to the ground between the rails.

A person’s mind is never more alert than when he is in physical danger, and mine was no exception. In this emergency, I thought and acted with lightning speed. The caboose was so close when I fell that I was unable to rise to my feet and run out of its way. I had fallen on my side but managed to turn over on my stomach. Extending my feet toward the North Pole and my hands in the opposite direction, I hugged the ground closely and tried my best to imitate a pancake. If it not been for my pack, still strapped to my shoulders, the imitation would have been a perfect one. I had a chill of apprehension as my pack, scraping along the bottom of the caboose, caught on a projection. With a feeling of relief, I heard the sound of tearing canvas, and it jerked free.

A feeling of unreality attached to the whole adventure until I heard the puffing of an engine. It seemed to be someone else lying between the tracks and hugging the ground so fervently. But the noise, connected with the progress of the engine, penetrated my mind and made me realize the seriousness of my predicament. There is very little clearance between the undercarriage of a locomotive and the road bed. Perhaps there is enough room for an outstretched person but hardly enough space for one as burdened as I.

These were my thoughts as I watched, through the corner of an eye, the passage of two more cars overhead and saw a third approach. It was when this last one was directly above me that a way of escape presented itself.

On the bottom of this car was a row of brake rods, something the other cars had lacked. What I did, when I became aware of their presence, was done intuitively. By twisting my body around, my hands were able to grasp the rods. My legs were dragged for some distance over the wooden ties before I managed to twine one of them around the rods and then the other. With my pack bumping along the ground, I held on for dear life and rode the brake rods in a new and novel manner.

I heard the sound of pounding footsteps on the wooden platform alongside of which the train was passing, and my attention was attracted to a runner keeping up with the train under which I swung. A white face appeared, and I recognized the horror-stricken features of my friend from the caboose. When he saw me unharmed, his worried look was replaced by one of surprised relief. He was not very coherent when he spoke to me, but I gathered he was making inquiries regarding my injuries. I assured him I had none. He had expected, he later informed me, to find my dismembered body strewn along the tracks.

The speed of the train was gradually decreasing. When it had almost ceased moving, the brakeman succeeded in relieving me of my pack and then helped me from my precarious perch to my shaking feet. He then hurriedly explained how his absentmindedness had nearly resulted in my premature demise. Upon making his abrupt exit from the caboose, he had gone to signal the engineer of a nearby locomotive that the track was clear. The latter, being ignorant of my presence on the tracks, had immediately backed into the cars.

Upon returning to his caboose, the brakeman had suddenly remembered me and realized the probable consequences of his forgetfulness. He had jumped to the moving ground at the same instant that he signaled the engineer to stop the train and, not at all enthused with the task, had gone to look for my remains.

Probably not more than two minutes had elapsed between the beginning and end of this experience. Because of the fast-moving action, it was not until afterward that I was able to appreciate the narrowness of my escape from a frightful death or serious injury. When I thought of what might have happened and listened to the brakeman’s stories concerning individuals less fortunate than myself, it was hard to believe I had suffered only a few scratches.