Thumbs Up by Harry I. Heller

As August is my father’s birth month, it is appropriate that I announce the publication of his book-length travel journal at this time. Harry I. Heller wrote a 70,000 word account of his adventures in hitchhiking 12,000 miles across the United States in 1929. I’ve edited his work and added a selection of photos from his album. It’s a project dear to my heart. In his waning years, my dad asked me to help him publish his book. As I explain in the foreword, it took me this much time to satisfy his wish. It is with great pride that I announce the publication of Thumbs Up. If you’re a history buff, armchair traveler, or Americana enthusiast, or if you like reading about adventure travel and exploration, this is the book for you. 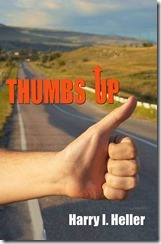 After taking his exams for the New Jersey Bar, twenty-four year old Harry I. Heller set off on a hitchhiking cross-country adventure. Relying upon his wits and not his wallet, he traveled across the United States without paying a dime for transportation. In the days when a job paid one dollar and seventy five cents per day and seeing a movie cost ten cents, he hitchhiked his way from New Jersey to California. Among his many escapades, he got lost in the Yosemite Mountains, confronted hungry bears, raced downhill in a moving van with burnt-out brakes, jumped on a speeding train, and climbed Pike’s Peak on foot. This true coming-of-age tale shows the courage, fortitude, and determination of a young man following his dream and learning to rely solely on himself.

Suddenly, I found myself wide awake. Something had disturbed me. I listened intently but heard only the rustling of the wind through the trees.

I felt certain an unseen presence lurked nearby.To investigate and assure myself of the absence of visitors was the proper course to follow. Although I realized the tent held no protection from danger, it nevertheless gave me a false feeling of security. The prospect of leaving the canvas covering was an uninviting one. I therefore remained stationary and hoped my nervous condition was due to an overactive imagination.

I soon discovered this was not the case. The breaking of a dried twig, as if by the weight of a heavy object; faint sounds resembling the movements of a body through the woods with a minimum of noise as if to avoid detection; and the unmistakable grunts of some animal, abruptly brought me to a sitting position. A short interval of silence followed. My uncertainty regarding the identity of the intruder, the possibility that perhaps a wild animal was sneaking to within striking distance, were not conducive to feeling calm. I became more and more frightened.

The disturbances were repeated but this time, as if the unknown had succeeded in its efforts to gain ground quietly, the sounds emanated from uncomfortably closer quarters. By then, I was not only very thoroughly scared but also paralyzed with fright.

When I stood between the rails upon which the caboose rested so as to get a better look through its open rear door, it was without realizing the roadbed was a hazardous place on which to stand.

The car contained a young man who, judging from his attire, was a member of the crew who occupied the home on wheels during its travels. He obligingly answered my questions pertaining to his business. Then an unknown duty summoned him to the front, and he disappeared from view behind a partition. Thinking his absence would be temporary, I waited for his return. However, he had forgotten all about me.

As I stood there, no ringing bell or whistle warned me of impending danger. One moment all was quiet and peaceful. The next moment, I was face-to-face with death.

A terrific crash shattered the silence. Simultaneously, the caboose seemed to leap toward me.

Thumbs Up is an inspirational travel adventure about a hitchhiker’s journey across America that offers a glimpse into our nation’s past. It’ll make readers nostalgic for this era and more appreciative of family, friends and home.

0 thoughts on “A Hitchhiking Adventure”