Meet Marla Shore, a Florida hairstylist and salon owner with a knack for styling hair and solving crimes. In her debut case, the brazen beautician unravels a shocking murder that’s making waves all over Palm Haven, a small southern town where almost everyone has something to hide. A coastal fundraiser and a murder at a fitness club round out this trio of fun, light reads.

Sassy salon owner Marla Shore is giving grumpy Mrs. Kravitz a perm when her client dies in the shampoo chair. If that isn’t enough to give her a bad hair day, handsome Detective Vail suspects Marla of poisoning the woman’s coffee creamer. Figuring she’d better expose the real killer before the next victim frizzes out, Marla sets on the trail of a wave of wacky suspects. Her theory regarding whodunit gels only after she looks for the culprit closer to home.

“A terrific mystery debut for Nancy Cohen. Marla the beautician is a delight!” Tamar Myers, author of the Pennsylvania Dutch Mysteries and the Den of Antiquity Mystery Series.

When South Florida hairstylist Marla Shore takes charge of a fundraiser for a coastal preservation society, she has to comb through a knot of suspects to determine who’s sabotaging their gala event. Participating chefs are dropping off the roster like hot rollers, and it’s only through a series of hair-raising exploits that she can tease the truth from a tangle of suspects. Too late to stop a murder, Marla must salvage the grand affair before she’s moussed into oblivion.

“Curl up with Nancy Cohen’s stylishly witty and chillingly suspenseful tale of murder on the Florida coast—Hair Raiser is a cut above.” Joanne Pence, author of the Angie Amalfi mystery series

Hairstylist Marla Shore joins a fitness club to get in shape but discovers a dead body instead of an exercise routine. Jolene Myers—a client at Marla’s salon—has drowned beneath the frothing waters of the whirlpool. When Homicide Detective Dalton Vail determines Jolene’s death was no accident, Marla decides to give her deductive skills a workout and help solve the case.

“This set was a wonderful read, each book was filled with a great plotted mystery, fun characters and a charming location.” Taryn L., Amazon Reviewer

“Marla Shore is a talented fiercely independent hairstylist running her salon. Having rebuilt her life after a tragedy, she finds herself in various situations where murder rears its head. Can Marla prove her innocence and expose the guilty? This 3-book set is non-stop action! Murder, love, tragedy, social issues, and yiddishisms add to this charming cozy set!” PMP, Amazon Reviewer

“Marla Shore is a delightful protagonist. If you’re looking for a cozy series that teases you with plenty of fun, the Bad Hair Day Mysteries are sure to satisfy!” Terry Ambrose, Author of the Seaside Cove Bed & Breakfast Mysteries

“Three fun stories. From the first crime, Marla meets Detective Dalton Vail who is determined to keep Marla away from working on solving these crimes. But Marla is unable to heed any of his advice. Even threats warning her to back off do not stop her. Nancy Cohen makes reading fun. I was eager to keep turning the pages to see what was going to happen next.” Jan K. on Goodreads

“A delightful box set that I blazed through in less than a week! Permed to Death: A disagreeable hair salon customer dies from poison in stylist Marla Shore’s shop. With Detective Vail hot on her trail, Marla decides a theory-of-the-crime makeover is needed, starting with trimming her off the suspect list. The believable characters and plausible situation drew me in from page one. Author Nancy J Cohen has me wrapped around her series’ perm rods. Hair Raiser: Hairdresser and beauty salon owner Marla Shore is having trouble keeping a full complement of chefs for the annual community fundraiser. When a board member is murdered, Marla investigates. Her friendship with Detective Vail takes a few wrong turns before righting itself. A well plotted mystery that kept me guessing. Murder by Manicure: Stylist Marla Shore takes a trial membership in a fitness club, and before she finishes her first workout, her client Jolene is dead in the whirlpool. A fascinating excursion into the world of cosmetics testing and an unsinkable protagonist. Marla has the energy of three people and the smarts to know where to look for answers. Muddy Rose Reviews 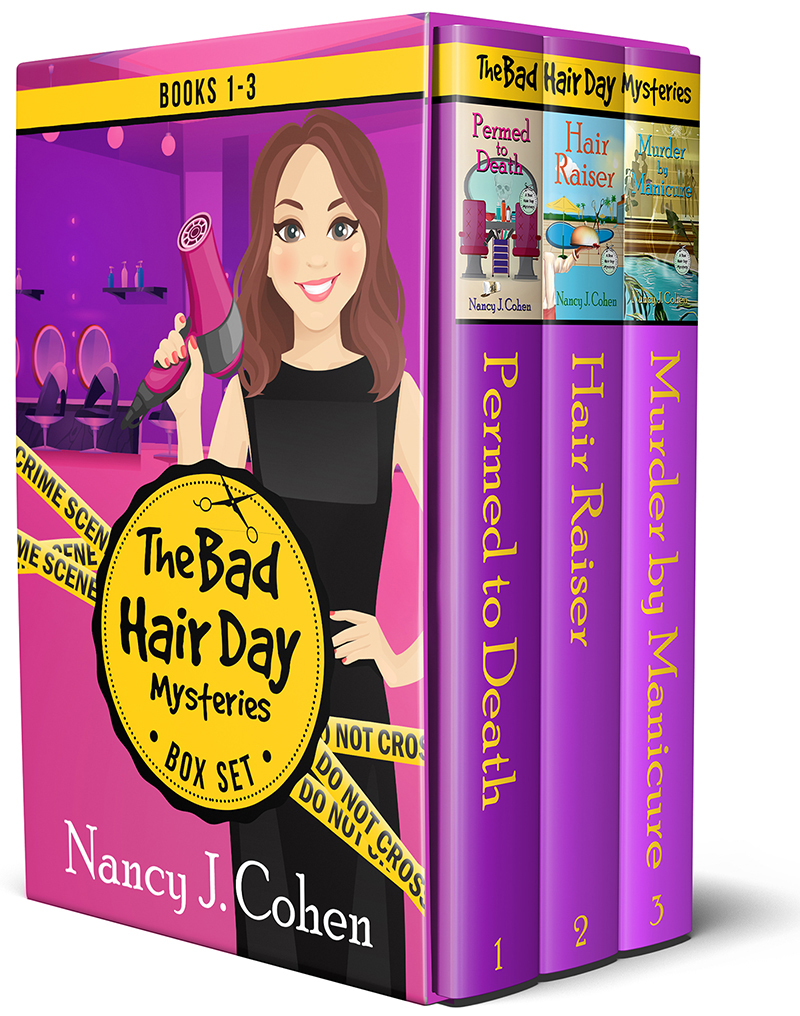