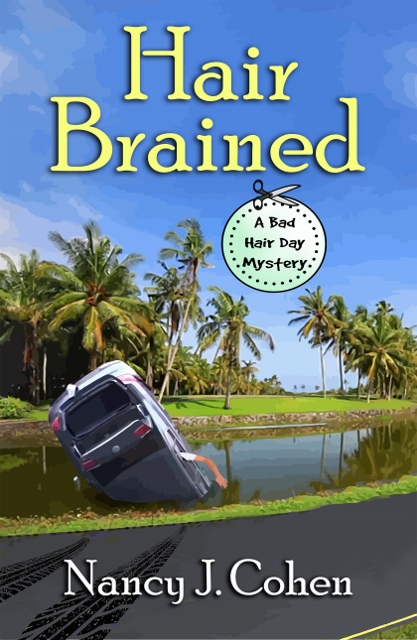 Hairstylist Marla Vail determines to learn the truth when her best friend is hurt in a suspicious auto accident.

When hairstylist Marla Vail’s best friend is hurt in a suspicious car accident, Marla assumes guardianship of her infant son. No sooner does Marla say, “Baby want a bottle?” than she’s embroiled in another murder investigation. Her husband, Detective Dalton Vail, determines the crash may not have been an accident after all. Can she find the culprit before someone else ends up as roadkill?

“You are always thinking and on your toes while reading this book.  And when you get to the end and everything is revealed….it will blow your mind!” Cozy Mystery Book Reviews

“Cohen threads a lot of good tension in the story and the investigation. At one point, it seems possible that Tally and/or Ken might not have been as innocent as they seemed. It is wonderful to watch Marla’s emotional journey from suburban housewife to investigator and, dare I say, ‘Mama Bear.’ ” LuAnn Braley, Back Porchervations

“Spending time with Marla and Dalton is like visiting old friends and I think Hair Brained is one of Ms. Cohen‘s better entries in the series. The mystery itself and their investigations are absorbing and the baby issue is a question that confronts many couples that are in a more “settled” time in their lives. Marla is directly invested in this particular case and rightfully so, creating a natural rationale for her sleuthing.” Lelia Taylor, Buried Under Books

“The characters continue to show more of themselves in the story and Marla begins to seriously rethink her stand on having children. I liked getting to know more about some of the secondary characters as well…The story actually has a couple of mysteries within its pages and all is worked out by the end, but there are a lot of plot twists along the way.” Carla Johnson Hicks, Carla Loves to Read

“A young infant and a flurry of disturbing information enter Marla’s life in Nancy Cohen’s newest mystery, Hair Brained… Cohen’s writing style is surefooted and her characters, vibrant and varied. Marla, Cohen’s featured character, may have had her past set of traumatic situations, but that doesn’t seem to stop her when she senses something awry. A feisty woman-of-action, Marla faces fear trembling but determined to win over dark and seemingly unconquerable conditions even with an infant in her arms…From warm and caring family members and well-meaning people scarcely eking out a living to an imaginative mix of surly folk, Cohen’s cozy represents folks from various backgrounds befitting amalgamated Floridians. The action builds with a slew of twists, turns, and near nail-biting climactic tension. The hair-raising, fast and delightful cozy mystery won First Place in the CIBA 2018 M&M Awards for Cozy Mystery Novels.” A. Lock, Chanticleer Book Reviews

“As the body count rises, the tension and danger increases not only for Marla but for Luke as well. This is the 14th in the Bad Hair Day Mystery series – they just keep getting better.” Christa Nardi, Christa Reads and Writes

“Anyone who does hair dressing or just loves a great cozy mystery will love this one! This one had me pulled in and I couldn’t let it go until I found out, like Marla, what happened that night and why! Definitely a page turner which kept me turning pages very late at night!” Paula Mitchell, Community Bookstop

“You are always thinking and on your toes while reading this book.  And when you get to the end and everything is revealed….it will blow your mind!” Missi S., Cozy Mystery Book Reviews

“Nancy J. Cohen has brought together family and friendship and paired it with murder, insurance fraud, and false identities. I stayed up late, well early into the morning, to finish this one. This book is a must read for cozy lovers whether you are already a fan of this series or not.” Lori Caswell, Escape with Dollycas Into a Good Book

“This is Nancy J. Cohen’s 14th Bad Hair Day mystery, and given its vigor, humor and inventiveness, the series has a lot of life left in it…Nancy Cohen is accomplished in her genre and craft. Her mastery of the “cozy mystery” category guarantees a good time, an inspiring adventure, a flock of well-defined characters, intricate plotting, plenty of suspense and many touches of delightful humor.” Phil K. Jason, Florida Weekly

“It is a joy for readers of this series to see Marla lower her guard as she opens her heart to the infant, even as she knows that she may ultimately have to give him up. Marla and Dalton have a loving marriage full of respect, as he has finally given in to her need to investigate and find justice for those she loves. Seeing Marla grow and mature is a rewarding experience in itself, but readers have much to look forward to as she enters the next phase in her entertaining and promising life.” Cynthia Chow, KRL News & Reviews

“A complicated and intense mystery with strong emotional elements that may make you look closer at your own friendships and personal values.” Laura Reading, Laura’s Interests

“Hair Brained, number 14 in her Bad Hair Day Mysteries, is another top caper in a series of fun reads. I can’t wait to see what Marla gets up to next.” Muddy Rose Reviews

“Nancy Cohen does an excellent job of constructing a suspenseful mystery, with thoroughly believable characters and conflict that produces great tension. I raced through the pages…Hair Brained is a compelling read. Don’t miss it!” Stephanie Saxon Levine, Murder on the Beach Mystery Bookstore

“I found myself swiping pages as fast as I could to find out what was going to happen next.  And not only for the mystery but to see how Marla was going to handle being an instant mother and how all of the turmoil in their lives would work itself out…I would recommend this book to anyone who likes a well-crafted cozy mystery.” Open Book Society

“Nancy J. Cohen’s latest mystery may be one of her most emotional after a car accident leaves her best friend in a coma. The story presents an awakening for Marla which she’s completely unprepared for as she’s abruptly thrust into this new role. As she digs deeper into the life and marriage of her best friend, she’s shocked to uncover secret after secret that leads Marla to believe maybe she doesn’t know her friend as well as she thought. This ups the stakes in the mystery as Marla is discovering information that changes everything she knew about her friend. This is an emotional mystery that has a lot of heart and delivers insane twists, one right after the other, as the danger increases for Marla when a dire turn of events could cost her everything. Hair Brained delivers the best mystery yet for Marla and her family and delivers new surprises, shake-ups, an emotional case, and a shocking turn of events.” Liz Konkel, Readers’ Favorite – 5 Stars!

“There were several twists and turns, plus many red herrings in this book. Just when I thought I knew what was going on, the author threw in a few extra curves to have me scratching my head.The characters are well-developed and realistic. They have quickly become old friends.Overall, this is a fun, enjoyable series filled with lovable characters. It’s the perfect way to spend a few hours.” Yvonne Hering, Socrates’ Book Reviews

“Readers will become immersed in book #14 as quickly as they did in book #1 of this incredible series. From page one, you’ll hang on every word as the twists and turns of the mystery are revealed and Marla goes into overdrive to prove that the friends she trusted all this time were definitely worthy of that trust.” Amy Lignor, Suspense Magazine