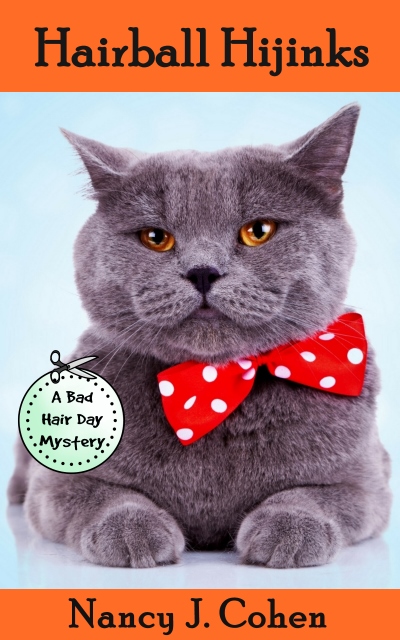 Hairstylist Marla Vail agrees to help find a neighbor’s lost cat and discovers a ransacked house where more than the pet is missing.

Savvy hairstylist and super sleuth Marla Vail visits her friend Tally who just got out of the hospital after a serious car accident. Marla has been caring for Tally’s baby and is sad but grateful to return him to his mother. She and Tally reconcile their friendship that had become estranged before the crash. Happy to have her friend back, Marla is about to leave when a knock summons her to the door. It’s a distraught elderly neighbor who claims her cat is missing.

Marla, unable to turn down a person in need, accompanies the lady home. But when Marla enters the house, she realizes much more is missing than a lost feline. The place has been ransacked, and when she calls the police, they inform her the neighborhood has been beset by a series of thefts. Can she find the crooks before they cause another cat’astrophe?

This story comes after Hair Brained, #14 in the Bad Hair Day Mysteries.

Bonus One: An interview with Marla
Bonus Two: 5 new recipes!
Bonus Three: A sneak preview of Trimmed to Death

“I loved this book. It has an adorable cat in it, what could be better?” 5 stars! Yvonne at Socrates’ Book Reviews

“This is a lovely story and a great way to keep us interested in between books. I have read the complete series of the Bad Hair Day Cozy Mysteries and I find each one to keep getting better and better.” Sandy B.

“This is a great book with a wonderful story and well developed characters.” Laura C.

“Besides being an enjoyable puzzle to solve, this book gently and tastefully brings about a conversation about loneliness and people being there for each other.” Laura R.

“In Hairball Hijinks, author Cohen came up with an ingenious way to satisfy long-time readers who want to know exactly what happened next as well as first time readers who will be captivated by the cat’astrophe and get to know hairdresser Marla Vail. This in-betweener wraps up the loose ends from Hair Brained so that a lengthy recap is not necessary before jumping right into Trimmed to Death. Not only do we find out what happened next, but we are treated to a delightful story.” Sally S.

“Marla Vail finds herself caught in another hairy mystery.” Bookreader on Amazon “Darling short story. Love the cat and the mystery!” Tara A.

“Follow along as Marla looks for a missing cat, tries to figure out who broke in, and helps her friend settle back into her home. Will she be able to find the cat and a burglar or will the mystery remain open? This was a wonderful short read that answered several questions the previous book had you asking at the end not to mention a fun mystery to solve.” Taryn L.