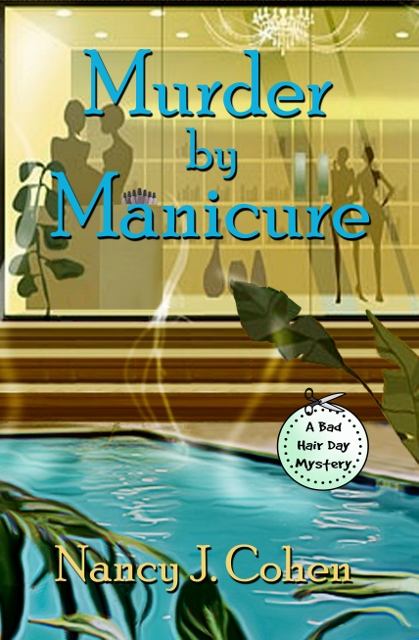 Hairstylist Marla Shore joins a fitness club to get in shape but discovers a dead body instead of an exercise routine.

A southern sleuth who’s a cut above the rest wraps up another nail-biting murder in this humorous cozy mystery.

Hairstylist Marla Shore joins a fitness club to get in shape but discovers a dead body instead of an exercise routine. Jolene Myers—a client at Marla’s salon—has drowned beneath the frothing waters of the whirlpool. When Homicide Detective Dalton Vail determines Jolene’s death was no accident, Marla decides to give her deductive skills a workout and help solve the case.

Jolene had few friends at the fancy athletic club. As Marla gets to know everyone, she wonders who might have targeted Jolene for a lethal soak in the hot tub. The shady pharmacist? The smarmy city councilman? Or maybe the vocal animal rights activist? The fitness club staff had no fondness for Jolene, either. How far would they go to keep their secrets? When another member turns up dead, Marla intensifies her efforts to nail the killer and wrap the case. If she fails, the next buff body on its way to the morgue might be hers.

“Cohen fashions her Bad Hair Day series with plenty of humor, snappy repartee and even a healthy helping of current events.” The News Press

“In Murder by Manicure, a southern sleuth who’s a cut above the rest pulls out all the stops to wrap up another nail-biting murder that will leave readers eagerly awaiting their next appointment with Marla Shore.” Barnes & Noble Ransom Notes

“Cohen leavens the narrative with Marla’s comments on hairstyles and makeup.” Publishers Weekly

“Cohen brings a good view of Fort Lauderdale and its suburbs.” Sun-Sentinel

“For the reader who enjoys the twists and turns of a tale by Mary Higgins Clark or the quirky humor inherent in a story by Kathy Hogan Trochek, Murder by Manicure is a must read!” ReaderToReader.com

“This book is the perfect read while sitting under the dryer.” Cozies, Capers & Crimes

“A great addition to an enjoyable series with a spunky heroine.” Mystery Lovers Bookshop

“This series is hilarious and very enjoyable and contains many hijinks. I always look forward to reading another book in this series to see what Marla will get into and find out the latest in her love life. I like this series set in a hair salon. People talk to their hairstylist. Marla finds out things most people wouldn’t be able to.” The Best Reviews

“Marla Shore is an irresistible creation….Nancy J. Cohen spins a puzzling mystery in the traditional vein, and the addition of Marla’s romantic adventures is delicious icing on the cake!” 4 1/2 stars! RT Book Reviews

“Murder by Manicure is a compelling mystery with intriguing characters, a suspenseful plot, and a surprising, yet perfectly fitting, conclusion.” Murder on the Beach Mystery Bookstore

“Fast paced and interesting…full of rich characters and attention grabbing plot twists…When it comes to murder, Marla proves the old adage true: Only your hairdresser knows for sure.” MyShelf.com

“I can offer you a fantastic deal if you sign up for a membership now,” urged Gloria, an account executive at Perfect Fit Sports Club. Sitting behind a desk in her office, she gave her customer a patronizing smile.

“I’m only here to register for the three-month trial membership,” Marla Shore explained. Crossing her legs, she surveyed the girl’s svelte figure, coiffed hairdo, and flawless makeup. You’d look better in a layered cut, she thought with the critical eye of an expert beautician.

“How can you turn this down? Don’t you want to save money?” Gloria persisted. “Normally, our contract runs for three years with an initiation fee of two hundred and ninety-nine dollars. But if you join today, I’ll give you a hundred dollar discount off that price. It’s a real bargain with the forty-dollar monthly fee.”

Just what I want to do with my money—tie it up in another monthly payment for three years.

Marla wondered how often Gloria worked out, or if she even bothered. Heaven forbid the girl should break a manicured fingernail on one of the exercise machines. Not that Marla was so familiar with the gleaming metal devices. Owner of Cut ’N Dye Salon, her main form of exercise was to take her poodle, Spooks, for his daily stroll. She felt as out of place in a fitness club as a white hair on a brunette.

“I’m just interested in the free trial. Is there someone who will show me around so I can get started?”

Gloria pursed her lips. “As a member, you’d receive a tour by a personal trainer. Otherwise, you’ll be on your own.” She sniffed. “I might add that people who come in for the free trial period never sign up for membership.”

Why is that? Became you’re so rude? “I don’t buy anything unless I try it out first,” Marla snapped.

“If you pay the full initiation fee at the end of the month, you’ll be sorry you didn’t join today. I’ll even throw in a coupon for a free massage if you sign up now.”

“Don’t you understand the word no?”

The girl’s face closed like a clamshell. “People like you never come back after the free offer is over.” Opening her desk, she pulled out a form and scribbled her signature. “Here’s your trial membership card.”

Grasping her bag, Marla stalked out. This place would never get her award for courtesy to customers.

She began her self-guided tour in the lobby, which held the front desk, a juice bar, and a comfortable lounge with leather armchairs. A glass partition walled off the wet section with its whirlpool and aquatics area. Offices and massage suites branched from the opposite side where a staircase led to an upper level.

Now you’ve gone and done it, she thought, glancing around in bewilderment. Coming here had been a gross mistake. She could feel it in her bones as surely as the January chill that penetrated through the green-tinted windows facing the parking lot.

Shmuck. You should never have let Tally talk you into this. It’s your fault for gaining weight over the holidays. Her best friend couldn’t make it tonight, so Marla had decided to get oriented by herself. Then, when she met Tally here on Sunday, at least she’d already know her way around.

“Is it always so quiet on Friday evenings?” she asked the receptionist, a ponytailed brunette focused on a computer.

The girl glanced up, her jaw working a piece of gum. “Oh, no, honey. Everyone’s at the competition over at Dayna’s Gym. I guess you weren’t interested in the prize, huh?”

“A date with Mr. World Muscleman.”

“You’re right, I’m not interested. Where can I get changed? I came here directly from work but packed a bag earlier.”

Pointing a finger, the girl said, “Walk through the wet area, and you’ll come to the locker room.” Her gaze surveyed Marla’s denim jumper dress. “Are you new here, honey?”

“Yeah, how could you tell?”

A grin split the girl’s face. “You have that lost look about you. Don’t worry, you’ll learn your way around soon enough. My name is Sharon if you need anything. By the way, I love your hair. Is that your natural color? It’s so shiny.”

“Yes, it is.” Marla patted her chestnut hair, curled inward at chin length. Even though her thirty-fifth birthday approached, she didn’t have any gray hairs yet. Considering her age, maybe getting in shape wasn’t such a bad idea. “I’m a hairstylist. Stop in at my salon, and I’ll give you a discount as a first timer,” she said, handing the girl a business card.

Glad she had worn rubber-soled shoes, Marla padded through the wet area, treading carefully along the slippery tiles. A whirlpool hissed and bubbled on her left, while on the right an aqua pool smelled strongly of chlorine. At the far end were doors to the sauna and steam rooms. I don’t need to go in there to feel the humidity, she thought, perspiration rising on her upper lip. The place oozed dampness like a mangrove swamp.

At least she was alone and could change in peace. But as she selected an empty cubbyhole for her street clothes, voices drifted her way.

“You’re a murderer! I know what you’ve done,” a woman cried.

“I’m warning you, leave me alone or I’ll file charges.”

Marla’s ears perked up. She recognized that smoky tone as belonging to Jolene Myers, one of her clients. Palm Haven was a small community, even though it counted as a western suburb of Fort Lauderdale, and she often ran into customers around town.

“I won’t rest until you stop that torture,” the unknown woman said. “Do you realize the pain and suffering you’re causing?”

“Give me a break, Cookie. We’re talking about laboratory animals here, for God’s sake.”

Marla rounded the bend and entered a tiled section with a row of sinks. Hair driers and various toiletries sat on the counter. In front of a wall-sized mirror, the two combatants faced off. 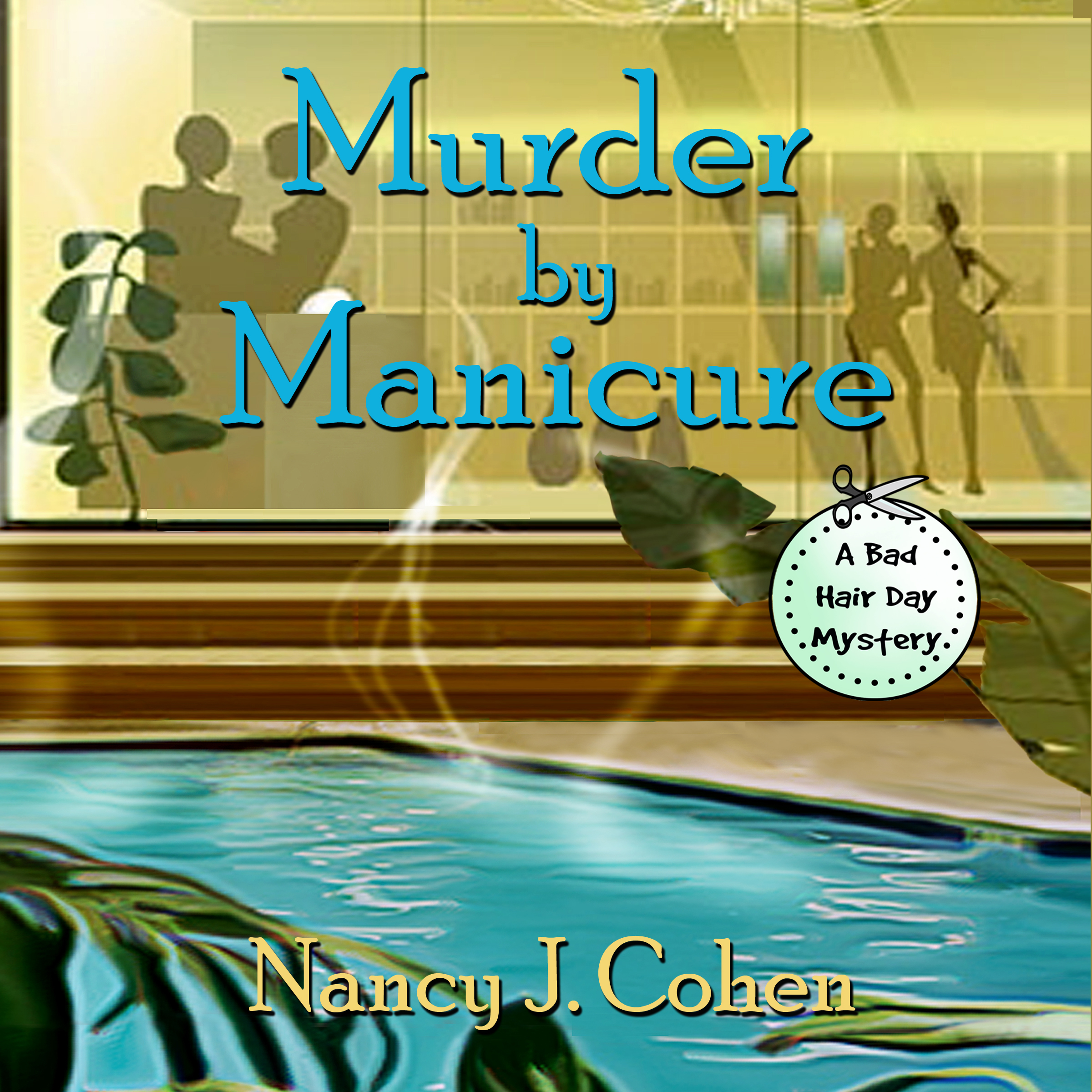 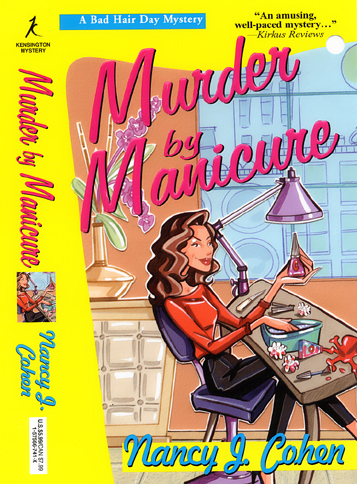 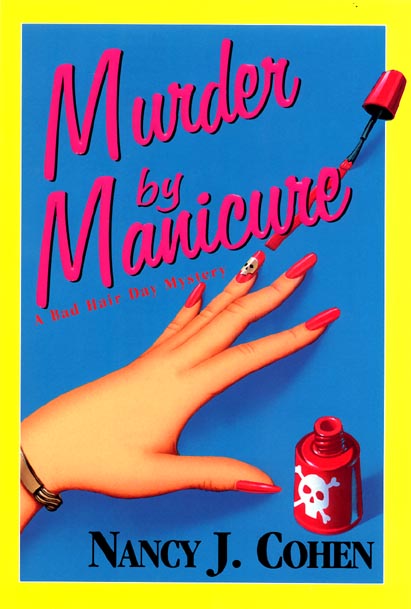