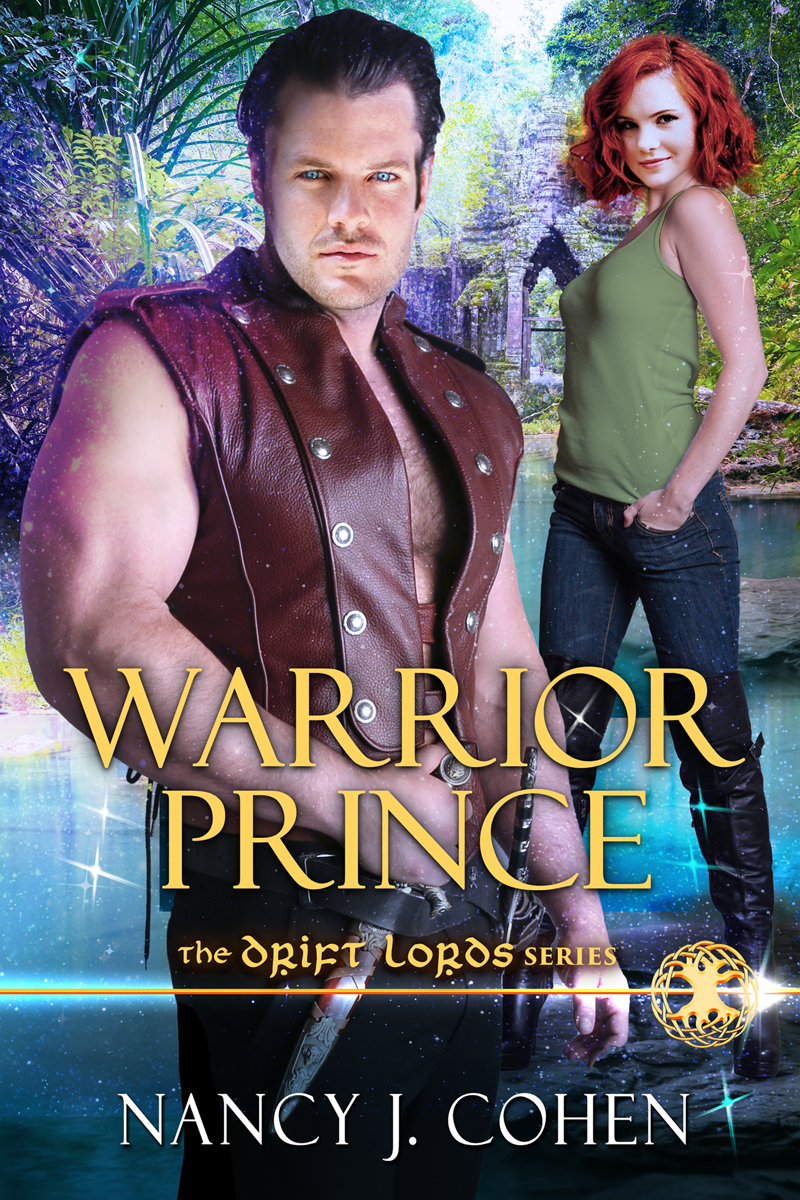 A galactic warrior joins forces with a sexy mythologist to stop a dimensional rift from destroying Earth.

When mythologist Nira Larsen accepts a job as tour guide for a mysterious stranger, she’s drawn into a nightmare reality where ancient myths come alive and legendary evils seek to destroy her. She must awaken her dormant powers to survive, but the only person who can help her is the man who inflames her passion.

Zohar, leader of the Drift Lords, has arrived on Earth to seal a dimensional rift opened by an ancient enemy. He doesn’t count on a feisty redhead getting in his way and capturing his heart. Nira has the power to defeat the enemy but also to enslave Zohar’s soul. Can he trust her not to betray him?

“The author weaves scifi and ancient Norse mythology in this sexy tale of danger and love.” Alyssa Maxwell, author of the Gilded Newport Mysteries

“Nancy Cohen’s Drift Lord series is terrific. The world building as she meshes contemporary times with other planets and mythology is outstanding.” Traci Hall, author of the Scottish Shire Mysteries.

“For a funny bone tingling non-stop action and adventure scifi thriller with a swirl of romance, Nancy J. Cohen’s Drift Lords series is one you won’t want to pass up.” Oh, for the HOOK of a BOOK!

“There is mythology, romance, betrayal, sexy aliens and beasts who want to destroy Earth. If those are things that you like, then this is definitely the book for you.” Paranormal Romance Guild

“With a mix of humor and action, Warrior Prince is not only a great romance but it’s about two strong people. Nira is trying to finish her education but is also on a journey of self-discovery and Zohar needs to accept his destiny in life and love. Any romance or sci-fi fan would enjoy this book.” Night Owl Reviews

“There are elements of sci-fi, fantasy, mythology, paranormal, and humor wrapped up in a steamy romance.” Wilovebooks

“The first Drift Lord romantic urban fantasy is a super thriller as Nancy J. Cohen brings ancient mythology to a city known for modern day mythos. Readers will relish this engaging save-the-planet before the protagonists can consider love.” Alternative Worlds

“This is a most enjoyable tale, with suspense in more than ample supply, leavened with romance, mystery, and mythology. Cohen excels in creating memorable and quirky characters.” Murder on the Beach Mystery Bookstore

“A beautiful merging of Sci-Fi and Norse Mythology. I strongly recommend this book!” Love in a Book Reviews

“Hi, I’m Nira Larsen, here for an interview,” she told the receptionist, whose solemn stare and black attire would have suited the funeral home she’d visited earlier.

“Please be seated until you are summoned.” The woman’s blunt-cut dark hair swung as she pressed a button on her console to announce Nira’s arrival.

Nira glanced at the small waiting area with its threadbare carpet, row of vinyl seats, and musty odor. Why was no one else here? And why did this place appear so seedy, with peeling paint and grime-coated windows? Maybe she didn’t want to work for people who treated their applicants with such disrespect.

Nonetheless, she’d like to land a position at Drift World. On her budget, she couldn’t afford a ticket to the role-playing adult theme park, but getting a job there would solve that problem. Plus she needed the money for other reasons.

She took a seat, an odd buzzing in her ears. It had started when she walked into the place. But even weirder had been the way the theme park’s temporary employment office appeared to materialize out of thin air.

The address specified on the classified ad had taken her next to a popular café on Orlando’s International Drive. Maybe she was just tired after her last two disastrous interviews, but she could have sworn this log cabin hadn’t been in the parking lot when she’d arrived.

Her thoughts scattered when the inner door burst open, and an attractive blonde smiled at her. “Come in, Miss Larsen. My name is Algie Morar. I understand you’re applying for a position as a makeup artist?”

Nira followed her into a corridor marked by closed doors on either side. At the far end, the hallway opened into a large room from which low male voices rumbled in a strange guttural tongue. A curtain made of fabric strips obstructed the view.

The woman halted and opened a door, gesturing silently for Nira to enter. But instead of facing a desk and chairs as she expected for an interview, she spied a treatment table, a sink, and a console like in a doctor’s office. A supply of cosmetics laid spread out on the counter: brushes, eye pencils, powders, and other familiar tools.

“Wait here.” Algie turned on her heel and left Nira alone. A moment later, she returned with a burly man in tow.

Nira’s mouth fell open. The stocky fellow had oversized ears, a long bulbous nose, and abnormally large hands and feet. His small beady eyes glared at her from beneath bushy brows. He wore a workman’s clothes, stained trousers and a plaid shirt.

“Jek is a test subject to see if you suit us for employment.” Algie’s brow wrinkled. “See if you can make him look more normal.”

Nira stifled a nervous cough. Aren’t those huge cauliflower ears prosthetics? “Uh, I’m not sure I—”

“Just use those makeup supplies.” Algie pointed to the counter. “Shadowing, for example, can de-emphasize certain features. You’ll know what to do.”

The blonde sauntered closer. Her porcelain features were so refined, she could have been a model. She leaned inward, her ocean blue eyes shining brightly, her rosy lips parting as though about to confide a secret. Nira couldn’t drag her gaze away. Her nostrils picked up a floral scent that held her spellbound.

It seemed so natural when Algie placed a palm on her arm like an old friend.

No. Nira sprang back, the buzzing sound in her head increasing to painful decibels.

Algie’s eyes blazed. “How are you resisting me?”

“Never mind, just do as I said. Fix Jek to look more human.”

Human? She shook her head. That annoying buzzing sound must be affecting her brain.

However, it didn’t affect her instincts. An inner voice hammered at her to leave. She backed away, but at a simple nod from Algie, the door slammed shut from an invisible force.

“You’re not going anywhere until I find out how you’re blocking me. Jek, seize her.”

The big man’s beefy hand clamped onto her arm.

“Let me go.” Nira fought to elbow him in the gut, but his strength overwhelmed her. He hauled her toward the treatment table. “Stop, or I’ll scream.” Panic laced her voice.

The woman’s sinister chuckle chilled her blood. “Go ahead. No one will hear you.”

The brute thrust Nira against the hard metal table and pressed her in place with his thighs.

“You’re different.” Algie’s smooth tone belied the enmity in her eyes. “You can block my spell. We haven’t met any humans like you before. It could be a danger to us.”

Nira swallowed against rising alarm. These people must belong to some cult. Get out while you can.

She stomped on Jek’s instep, hoping to dislodge his grip. He merely chuckled and dumped her supine on the table. When he reached for restraints, she screamed.

“Help! Someone help me!”

Jek had secured one wrist in a leather strap when a crash sounded from outside in the corridor, followed by shouts and loud blasts. The door burst open, and black-clad masked figures poured inside. They aimed weapons at Algie, who repelled their fire by dodging aside in a blur of speed and then vanishing. Air rushed by Nira’s ear. Then Jek was gone as well, leaving her at the mercy of these formidable men.

They stood in a huddle, murmuring in low voices. One of the terrorists slid his gaze her way and pointed.

“I’ll take care of the woman,” he said in a commanding tone. “Algie and her troops have probably vectored out by now, but search the place anyway and see what you can find.” As the others scrambled to obey, he strode over to where Nira lay helpless on the table.

Wriggling against the strap holding her down, she cursed when it wouldn’t give way. Now what? Was she a prize to be claimed by their leader? She cringed when he stroked her cheek.

“Who are you, little one?” His gentle tone surprised her. “And how did you resist the Confounding?”

“Untie me.” She attempted to twist away, but he gripped her shoulder, holding her down. Flat on her back, she gazed into his intense turquoise eyes. She couldn’t see the rest of his face, hidden behind a hooded mask that covered his head. He smelled like pine trees and peat smoke. Calm trickled through her, quieting the buzz in her mind.

Strange that she didn’t abhor this man’s touch as she had Jek’s. Far from it. She squirmed under his scrutiny, aware that her situation wasn’t much better and yet she felt no fear. The stranger in black continued to study her, his eyes narrowed as though he contemplated a decision.

Banging noises sounded from outside as his men searched the building as per his orders. A single lightbulb glared overhead, casting the room into a surreal light. Dust motes floated in the air.

“I will release you, but you must come with us.”

Ice water sluiced through her veins. She didn’t want to go anywhere with these fierce looking men. “Look, I won’t tell anyone what’s happened here if you let me go home.”

“I understand you are frightened. Be assured no further harm will come to you.” He spoke soothingly, as though to a child. “I promise to keep you safe.”

“Please, just set me free.” She hated the way her voice quavered.

“How about if we make a deal? My men and I will take you home, but then you must listen to my proposal. We could use your help.”

She nodded, having every intention of bolting for the door when on her feet. As he untied the strap around her wrist, tingling warmth raced along her nerves. Before she could jerk away, his strong hands grasped her by the waist and lifted her off the table.

Be sure to visit the Warrior Prince Pinterest Board 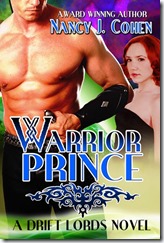