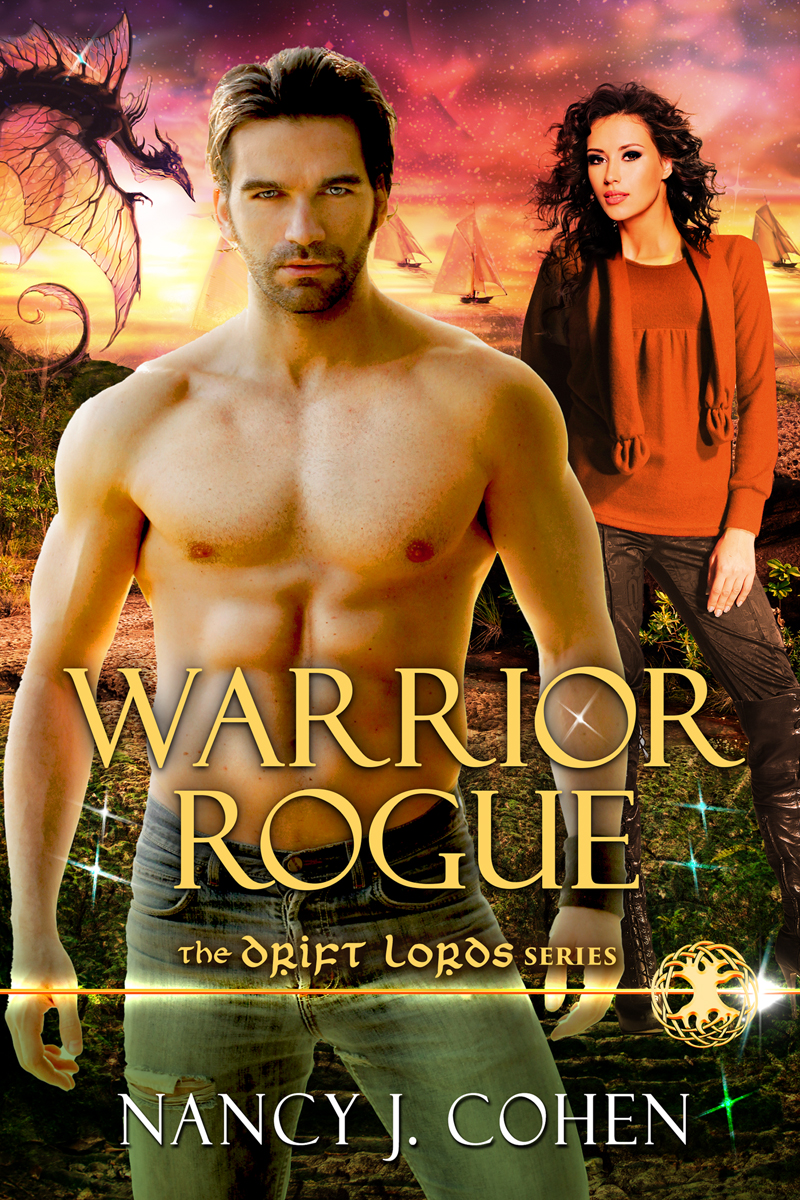 A fashion designer and a space warrior race to fulfill an ancient prophecy and save the world.

Fashion designer Jennifer Dyhr’s world turns upside down when she hires a hunky actor for her video game commercial. No sooner do they board an aircraft and take off when they’re assaulted mid-air by alien invaders. Even more dangerous are the man’s sensual caresses that ignite the embers in her heart.

When space ops warrior Paz Hadar falls through a spatial rift onto Jen’s film set, he soon realizes she is essential to his mission. Not only must he protect her, but his success depends upon her special powers. As they struggle to stay one step ahead of the enemy, he discovers that fighting his attraction to the lovely Jen is as much a challenge as keeping them both alive.

“Cohen’s futuristic, paranormal romance blends aspects of science fiction with magic and mythology then tops it off with steamy scenes that are so hot you will need a fan and a mint julep drink to cool off.” Manic Readers

“This is an exciting read set in a rich, detailed, and fascinating world peopled with interesting characters. The author mixes aliens, heroes from space, Norse mythology and creatures from that mythology to create a fast-paced read with a dash of romance.” Coffee Time Romance

“Like all alien invasions, it’s a race against time before Earth is invaded. But this time around we find Norse mythology playing a huge role. I loved the infusing between this and the epic alien scenario. It brings elegant splendor to the plot. Highly recommend this epic adventure filled with passion and drama.” 5 Stars! Eclipse Reviews

“Rips in the space fabric, special powers, and naked men, oh my! This is a book you will devour in one fell swoop! Nancy J. Cohen has created a very realistic world with characters you cannot help but love.” Faerie Tale Books

“Romance, Fantasy, Sci-Fi, etc., all rolled up into one neat package that keeps you on the edge of your seat. There’s a good dose of humor and passion with a satisfying ending. What really appealed to me was the present-day setting. Highly recommended for all fiction readers.” Haley’s Comments

“You have aliens, interstellar heroes, mythology, dragons, demons, and demi-gods all rolled into one. Most of the story is fast-paced action, but there is a nice dose of romance thrown in. It all managed to work well together.” Jessica Loves Books

“I love the Drift Lords so much I dream of having one of my own.” Manic Readers

“Paz and Jen spent much of their journey alone together, really getting to know each other. It had a Romancing the Stone feel to it that I really liked.” Musings and Ramblings

“Fantabulous book! I really enjoyed this unusual mix of sf and fantasy romance. Both main characters were interesting and grew during the book. The pace of book was excellent, the secondary characters were well-done and distinctive.” RomCon®

“This series is a combination of sci-fi, fantasy, mythology, action and steamy romance. I love the characters. The story grabbed me from the beginning and didn’t let go.” WiLoveBooks

Jen braced herself as the director hurried over. A lanky man with black hair, Mr. Nakamura wore a perpetual scowl and his tense posture like a seasoned samurai.

“Keith Monroe is passed out drunk in his hotel room,” the translator interpreted after a rapid-fire dialogue by the director. A boyish-faced youth, Akeno had confided to Jen his wish to work on the film crew someday.

She bowed her head in deference, expecting a tongue-lashing in response. Her Japanese associates would need someone to take the blame. Jen only hoped this snag wouldn’t damage the reputation she’d worked so hard to build.

“The producer has already called the casting office for a replacement,” Akeno said after another spate of dialogue from his employer, whose irate tone matched his angry eyes.

“We need a guy with the right build,” she reminded them. “Blond hair and blue eyes would be a bonus.”

While they waited for the stand-in actor to arrive, Jen inspected the stitching on her costumes.

“Jen, this woman’s seam is splitting.” Sandi indicated one of the extras portraying a villager.

Jen cursed under her breath. “Did she sit down? I told her not to bend. This shift barely fits around her hips.”

She grabbed a needle and thread from her kit as the director herded everyone to take their places on set. The storyline involved a barbarian ravaging a peaceful village until a Norse god appeared to battle him.

It amazed her how the sound stage looked like a real Viking town with thatched roof houses spewing smoke from holes in the roofs, vendors lining a busy market street, and wood planked walkways leading toward a fake pier rimmed with barrels of wine.

The village street bustled with action as actors walked through their paces and chatted amongst themselves. She could almost smell the sheep dung and wood smoke.

Uh, oh. Her visions often started with a sensory impression. Quickly, Jen wrapped up her repair and stashed away her kit. Reality receded as a white haze swept into her mind.

When her eyes focused again, she was strolling down the village street in the distant past.

Her gown swished against her leather boots as she beamed a friendly smile to the blacksmith. Across the road, the fur peddler waved. She nodded him a greeting, her nose wrinkling at the smell of fish emanating from the wharf. Shivering, she drew the edges of her shawl closer together, as a stiff breeze blew off the sea.

Shrieks of surprise made her vision evaporate. A man charged into view from around the corner onto the studio set.

Jen stared at him, aghast. What kind of joke was this?

Lacerations marred his body, and heavens above, what a magnificent body the man had. Her glance dropped from his massive shoulders to his muscled chest and then down to his very masculine package. The glory of him stole her breath.

“Where am I? What’s happened?” His wild-eyed look and combative stance froze the actors on set.

His American accent startled Jen. Brilliant, just brilliant. Who else but their stand-in for Keith Monroe would show up with such melodrama? She should have recognized him at once from his wheat blond hair and blue eyes, but she’d been too focused on his, ah, other parts.

She fought an urge to fan herself, the heat from the spotlights raising her temperature. Or maybe that wasn’t what caused her to feel so hot all over.

The man’s gaze slammed into hers, and time stood still. The distance between them shrunk, blotting out their surroundings, until only the two of them stood facing each other on a plain where mist swirled at their feet. Their heartbeats pounded a sensual rhythm in harmony.

In her mind’s eye, she shed her clothes as a hunger she’d never known swept through her. A hunger for him.

Shaking her head, she reoriented herself. Much as she’d like to admire his physique all day long, they had to get moving. Time was money as far as the producer was concerned. This guy needed to be clothed, fast.

“Sandi, get me Keith’s costume and tell the makeup artist we need her.” Jen’s voice came out as a high-pitched squeak. She cleared her throat. “Our new stand-in has done a great job on those fake wounds, so he shouldn’t need more than a touch-up.”

Mr. Nakamura hustled over with the translator in tow. He jabbed his finger at the new guy. “You there, what is your name?”

The actor stiffened but didn’t respond. He glanced at the other crewmembers who had stopped to watch. A look of confusion spread over his face. His jaw tightened, a day’s growth of bristle adding authenticity to his role.

“What’s your name?” Jen spoke in a loud tone like people did to foreigners who could hear perfectly well but didn’t understand.

“I am Paz Hadar.” His dimples deepened as he regarded her. “Who are you?”

His slow, lazy perusal made warmth curl through her. Those devilish eyes roamed from her hair, to her rayon maxi dress, to her low-heeled sandals. A gleam of appreciation entered his expression, making her heart beat faster.

“I’m Jennifer Dyhr, the costume designer.” Jen pronounced her last name like deer. “You are inappropriately dressed, Mr. Hadar. Or undressed, I should say.”

Mr. Nakamura’s lips compressed. “Tell him he has ten minutes to get ready. I am not amused by his dramatic entrance. He is only a substitute for our star.”

Jen gave him a deferential bow. After he walked away, she signaled to Paz. The man sauntered over as though strolling about naked was a normal occurrence. Had he meant to disrupt the set and attract everyone’s attention?

No matter. She had to make him look like a vengeful Norse god. Standing before her, the man towered over her five foot eight frame by at least six inches.

Moisture glistened on his skin. His hair hung in damp clumps, as if he’d just come from a swim. He must have been near the studio to rush over, disrobe, and apply his makeup.

However, he’d forgotten to remove his watch. Having been so focused on his other attributes, she hadn’t noticed the fancy dial before. Further up his forearm was a broad gash. When she touched the edge, he winced as though it hurt for real. Unable to help herself, she let her fingers slide up his arm, outlining his firm bicep. He drew in a sharp breath but didn’t move.

Her glance roamed to his chest, where a tangle of golden hair tempted her to feel its texture. His scent entered her nostrils, a strange mixture of sea air and salt.

Her temples pounded. Oh, no. Afraid she’d segue into another vision, she grabbed the trousers Sandi brought over and thrust them at him.

When he just stood there, she clucked her tongue. “What’s the matter with you? Put these on. And take your watch off. It doesn’t belong in this scene.”

He plucked the pants from her fingers and pulled them on while she averted her gaze. When he muttered under his breath, she dared to look again. Poor fellow fumbled with the drawstring ties at his waist as though he didn’t know what to do with them. Good God, what planet did he come from?

Be sure to visit the Warrior Rogue Pinterest Board 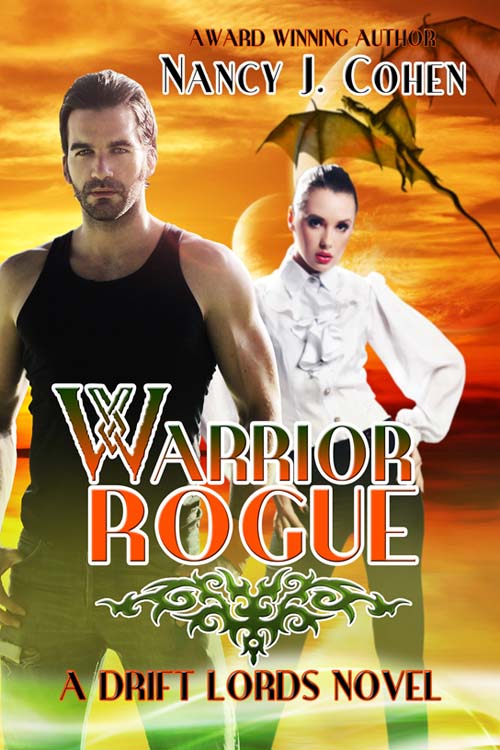