Having Too Many Story Ideas

Having Too Many Story Ideas

Writer’s Block is often interpreted to mean that a writer stumbles over what to write next. Or he comes to a complete halt due to outside distractions or loss of confidence. But what about when he has so many ideas, that he can’t complete a single one? This can be conceived as another type of writer’s block. 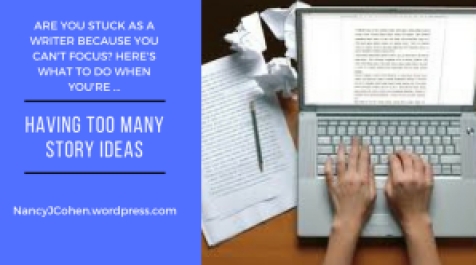 “I have too many ideas at once, and I don’t know which one to pick,” an aspiring author wrote to me. “What is your advice on this issue?”

It’s great if you have lots of story ideas. It’s not so good if you allow them to distract you until you can’t write anything. Or maybe you’ll write a bit on each one but never finish a single novel. My suggestion would be to pick the one idea that excites you the most and keep writing until you finish the first draft. Yes, it’s that simple.
“You’ve had two series going on together. How did you manage it, both mentally and during the actual writing? Was it difficult going back and forth? Is it easier to finish one at a time?”
I can only work on one project at a time. Even when I was writing two series in different genres, I would focus on one book until it was finished and in the hands of my editor. When that book was completely done, I would turn to the next project.

What happens when you have so many ideas that they interfere with your concentration? Write them down. Keep a “New Idea” file or a “Plotting” file and jot down your notes. Then put them aside until you finish your current project.
Set yourself daily and weekly writing goals for your story of choice. Then sit your butt in the chair and drive yourself each day until you meet your quota. Do not stop if one of those tempting ideas entices you. Concentrate on the book at hand. Later on, those ideas will either be viable or not. You’ll know better when you gain some perspective. For now, you have one project only that you need to finish. To reiterate:
· Pick your project.
· Set your writing goals.
· Write down all the distracting ideas in your head and set them aside.
· Begin on your daily writing quota.
· Keep writing until you finish the first draft.
Next come revisions, and that’s another topic we’ve already addressed here. Your book isn’t done until it’s done. Edited, Revised, Polished, and Submitted.
Then and only then, you may turn to your list of potential new projects. If you’re writing a series, you will need to begin the next installment. If not, listen to your heart and determine which idea is calling to you. Your passion will shine through in your words. Have some ideas that don’t resonate anymore? Scratch them off the list. You want to be excited enough that the buoyancy will sustain you throughout an entire novel. One idea at a time. One day at a time. One page at a time.
GIVEAWAY
Enter Here to win a $25 Amazon/BN gift card from Booklovers Bench.