As you do your holiday shopping, consider supporting authors and booksellers by buying books for gifts. You can find something for everyone’s taste. Even your friends who don’t own an e-reader device can download free apps to their cell phones or tablets. So you can still gift them an ebook. If you have an indie bookstore in your area, stop by and make a purchase. We need to show our support for these stores that still exist. And now for the commercial. Here are some of my titles for you to consider:

For Your Hairdresser, Nail Tech, Beautician and/or Readers Who Love Mysteries

Give them a Bad Hair Day Mystery. The adventures of hairstylist and salon owner Marla Shore will thrill them with murder, mayhem, humor and romance. If you want a brand new hardcover, start them off with the latest title, HANGING BY A HAIR. Most of the Bad Hair Day Mysteries are available in digital copies. Look for them here: Whatever genre they write, they can use a copy of WRITING THE COZY MYSTERY. This instructional guidebook will take them step-by-step through the process of writing a winning whodunit. For the Romance Fan

For friends who like a hot, sexy read, give them a book from my Drift Lords series. These romantic adventure tales will sweep them away to a modern world mixed with myth and magic. WARRIOR PRINCE, WARRIOR ROGUE and WARRIOR LORD are available in print and digital formats.

Contest Alert!
Win a $25 Amazon/BN gift card or 1/6 free ebooks from Booklover’s Bench authors, including a copy of my cruise ship mystery Killer Knots, in our December contest: http://bookloversbench.com/contest/

How do you entertain for a crowd? It’s best to be well organized and to do as much ahead of time as you can. Here are a few tips to get you started:

On Memorial Day weekend, we had some writer friends over. Counting our family members, we had about 16 people total. I wrote the menu after we sent out email invitations.

Recipes for the starred items can be found on my Website.

· Choose your menu
· Make a grocery list
· Shop for non-perishables

A few days before the event,
· Take out your serving platters and utensils
· Label each serving dish with the intended item
· Set the table(s), including centerpieces, the day before
· Put out candles and do last minute cleaning
· Decide upon background music, if any

Labeling the serving dishes saves time so I can spoon out the food quickly into predetermined platters and bowls. You also won’t have to go hunting at the last minute for those extra serving plates.

· Prepare foods the day before the event when possible. Otherwise, get an early start the event day so you’ll have plenty of time to rest up, shower, and get dressed.
· When guests arrive, offer them a drink and point out where they can get food. Introduce guests to each other. Then relax and enjoy yourself! 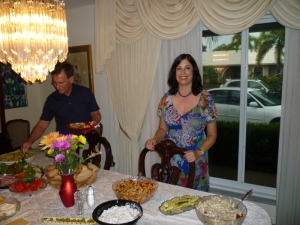 These tips apply equally to any holiday and to your next cruise as well. Thanks to mystery author Michael Haskins for passing them along.

1. Avoid carrot sticks. Anyone who puts carrots on a holiday buffet table knows nothing of the Christmas spirit. In fact, if you see carrots, leave immediately. Go next door, where they’re serving rum balls.

2. Drink as much eggnog as you can and quickly. You can’t find it any other time of year but now. So drink up! Who cares that it has 10,000 calories in every sip? It’s not as if you’re going to turn into an "eggnog-aholic" or something. It’s a treat. Enjoy it!!!! Have one for me. Have two. It’s later than you think. It’s Christmas!

3. If something comes with gravy, use it. That’s the whole point of gravy. Gravy does not stand-alone. Pour it on. Make a volcano out of your mashed potatoes. Fill it with gravy. Eat the volcano. Repeat.

4. As for mashed potatoes, always ask if they’re made with skim milk or whole milk. If it’s skim, pass. Why bother? It’s like buying a sports car with an automatic transmission.

5. Do not have a snack before going to a party in an effort to control your eating. The whole point of going to a Christmas party is to eat other people’s food for free. Lots of it. Hello???

6. Under no circumstances should you exercise between now and New Year’s. You can do that in January when you have nothing else to do. This is the time for long naps, which you’ll need after circling the buffet table while carrying a 10-pound plate of food and that vat of eggnog.

7. If you come across something really good at a buffet table, like frosted Christmas cookies in the shape and size of Santa, position yourself near them and don’t budge. Have as many as you can before becoming the center of attention. They’re like a beautiful pair of shoes. If you leave them behind, you’re never going to see them again.

8. Same for pies. Apple, pumpkin and mincemeat – have a slice of each. Or, if you don’t like mincemeat, have two apples and one pumpkin. Always have three. When else do you get to have more than one dessert?

9. Did someone mention fruitcake? Granted, it’s loaded with the mandatory celebratory calories, but avoid it at all cost. I mean, have some standards.

10. One final tip: If you don’t feel terrible when you leave the party or get up from the table, you haven’t been paying attention. Reread tips: Start over, but hurry, January is just around the corner.

Remember this motto to live by: "Life should NOT be a journey to the grave with the intention of arriving
safely in an attractive and well preserved body. But rather to skid in sideways, chocolate in hand, body thoroughly used up, totally worn out and screaming "WOO-HOO what a ride!

It’s hard to get any real writing work done during this busy season, especially when I don’t have any fixed deadlines. Nonetheless, I’ve been working on three different projects. I’m revising an earlier mystery series proposal, plotting my third paranormal romance, and polishing my last backlist title for digital conversion. I’ve also been cleaning my office, tossing out old papers and memorabilia, and sorting through my collection of books to see what I can donate to the library. Included in this frenzy of activity is shopping for holiday gifts, writing greeting cards, etc. Oh, and we’re also packing for our next cruise. So I’m going to take a blog hiatus for a while until we get past all these events.

Here’s wishing you a happy and healthy holiday season! Be safe and stay warm.

What should you buy for the writer on your gift list? Some of these items are no brainers. Others are generic, and still others apply to the individual. But here are some cost-effective ideas that may appeal to all in no particular order. The best way to get a wish list: Ask. Or go look at their desk if you have access and see what they collect or use the most.

Some of the more interesting gifts I’ve gotten have come from my writer pals or my kids, like the jar labeled Writer’s Remedy that holds little squares with different words for inspiration, or the figure holding a hammer to his computer with a plaque that says #1 Author & Mom, or the coffee mug with my book title. Be imaginative, or be simple. Whatever you give will be appreciated.

Here are some ideas:

What else would you add?

HOME FOR THE HOLIDAYS

With Thanksgiving and the Holidays approaching rapidly, now is the time to straighten your house and clean out the clutter before festooning your living room with decorations and welcoming your guests.

Here are some tips for getting started:

1. Dust Collectors: Make a list of all the items you want to get rid of in terms of furniture, memorabilia, paintings, and knickknacks sitting idly on your shelves. Write down descriptions and the prices you’d like to receive. If necessary, take digital photos. Then decide if you want to put them on eBay or Craigslist, have a yard sale, sell them on consignment at a local auction house, or donate them to a charity.

2. Photos, Slides, and VHS Tapes: Consider converting these into digital format. Re the photos, do you want to scan them onto a DVD, upload them to online storage, or scrapbook them into an album? It’s easier to sort your photos first by subject and then tackle one album at a time. Now’s the time to throw out duplicates and blurry pictures. Clear your drawers for other uses and save your heirs the job of sorting through this stuff later. Label the photos as you sort them. And how about slides and family videos of your early vacations or of the kids? Photo shops and places like Costco will convert your slides and VHS tapes onto DVD. Pay the price then toss the slides and tapes that take up too much room. Or buy a machine that will convert VHS to DVD in your home.

3. Clothing, Shoes, Handbags: Sift through your closet with a ruthless hand. Collect any clothing you haven’t worn in years and accessories you no longer favor. Donate them to a charity or hold a yard sale.

4. Files: Try to clear out those mounds of papers that collect everywhere. Tackle one pile at a time. Throw out items that are no longer relevant. File papers you want to keep for reference. Take care of things that need immediate attention. You’ll feel better when your home office or kitchen counter is more organized.

5. Stuff That Doesn’t Belong To You: What do you do about all the items in drawers and boxes that belong to your adult kids or spouse? Can you toss them without permission? If the item has any meaning to your loved one, don’t touch it. You wouldn’t like it if someone threw out your treasures, even if they held value to no one else. Remember the command: Do unto others as you would have them do unto you. On the other hand, if you find a lot of old papers or letters, toys or tools, etc. that likely no one would miss, why not box the stuff and tell the owner you intend to toss the items. You’re giving him or her the option of sorting through them first. This makes the task less overwhelming by dividing it into small bundles to attack at a time.

6. Prepare For Company: Now that your house looks neater, and you’re ready to get out the decorations, there’s one more thing you have to do. Polish the Silver. Here’s a handy tip on getting your silver bright and shiny with little effort.

Put the stopper in your kitchen sink drain. Line the sink with aluminum foil, shiny side up. Fill the basin with warm water. Dissolve 1/4 cup each salt and baking soda in water. Put in silver pieces. Let sit for a few minutes, then rotate. Sprinkle in more salt and baking soda as needed. When tarnish is gone, remove the item onto a clean towel and dry. If you wish, rub off stubborn spots with your favorite silver paste, rinse, and then buff with a dry cloth.